Letter to IN BikePort Users

Bicycle Garage Indy / BGI Fitness has been happy to provide services for the bike lockers in downtown Indianapolis for the past 10+ years. We helped usher in secure bicycle parking as a way to encourage bicycle commuting in Indianapolis. Many of you have used the bike lockers frequently for much, if not all, of that time frame.

Several events have occurred recently which prevent us from providing the services as we have in the past:

3. The park-by-phone system, while innovative 10 years ago, has been replaced by a new system by Cycle-Safe, the maker of the bike lockers and by another and different system by Park-by-Phone (Clancy Systems). We no longer have the ability to replace/repair parts for the old system. We have sent quotes to both NIFS and the State of Indiana for upgrading to the new system with Cycle-Safe and have not heard anything from either location. That said the cost of upgrading to the new system is not insignificant. If either organization wants to upgrade to the new system and bring us back on board as preventative maintenance / trouble-shooters, we would welcome that opportunity.

4. Because of the changes to a new system and website at Park-by-Phone/Clancy Systems, we no longer have the admin access we used to have to be able to clear lockers or check who is occupying specific lockers. This makes it difficult for us to provide assistance to those using the bike lockers.

5. We will be turning over the keys to NIFS and the State of Indiana for the bike lockers that they are responsible for. We will no longer have the ability to let folks in/out of the bike lockers at the Indiana Government Center or at National Institute for Fitness and Sports.

1. Merchants Parking Garage: Bicycle Garage Indy / BGI Fitness owns the bike lockers at Merchants. We will do our best to maintain these lockers given the current constraints. Please continue to contact Connie or Randy with any issues with the Merchants Plaza bike lockers (31 S. Meridian): Connie (317-777-9630, cschmucker@bgindy.com) / Randy (317-965-5369, rclark@bgindy.com)

2. NIFS: NIFS keypad is not functional currently. We replaced the keypad, but that didn't fix the issue. We tried to get a replacement board but that was unsuccessful. They are currently accessible via key. Please contact Melanie Roberts (mroberts@nifs.org) at NIFS to get access to the bike lockers.

3. Indiana Government Center - Bike lockers on Ohio St. (Banks A & B): These lockers are still working. Any issues you might have with them and any concerns you have about the bike lockers should be directed to Brian Renner, Deputy Commissioner, Indiana Department of Administration, 317-232-6795, brenner@idoa.in.gov

For users of Indiana Government Center bike lockers: IN BikePort volunteer Steve Morris, Indiana Department of Natural Resources, has retired. The key that Steve used to help with bike locker access when the system wasn't working has been handed over to Amy Marisavljevic (AMarisavljevic@dnr.IN.gov, 317-232-4067), also with Indiana Department of Natural Resources and a regular bike commuter. If Amy is out of the office, Dale Brier can be contacted at dbrier@dnr.in.gov

4. Indiana Government Center - Bike lockers on Senate Ave. (Bank C): These bike lockers are not working and need to be replaced. Any concerns you have about the bike lockers should be directed to Brian Renner, Deputy Commissioner, Indiana Department of Administration, 317-232-6795, brenner@idoa.in.gov

5. The Park-by-Phone help line is 800-997-0197. They should be able to help you with membership issues and access issues related to codes. They are open 10 am - 6 pm EDT M-F (their offices are in CO). Any issues related to batteries and mechanical issues would need to be relayed to the appropriate party as outlined above.

We have been privileged to see the bicycle commuting grow and have been happy to be a part of this in some small way. We will do what we can to make this a smooth transition.

Update 6/23/17: Until further notice, the bike lockers at NIFS (National Institute for Fitness and Sports) are no longer functioning.

The lockers at the Indiana Government Center (A, B) keypads are currently working. Please notify us if you find they are not working.

Please contact us if you find lockers are not working so we can address the issue. Thanks for using IN BikePort.


NOTE: Codes may not work between 3:00 and 3:30 AM (EDT) when codes are being reset. Please be aware that the lockers may not be accessible during that 30 minute window.
As of September 2017, IN BikePort is no longer providing maintenance services for the bike lockers at IN Government Center or NIFS. We are still providing services for the Merchants Garage bike lockers (owned by Bicycle Garage Indy). Please refer to the letter above for the appropriate organization/person to contact to report issues with the bike lockers.

The purpose of the bicycle lockers is to encourage bicycle commuting in Indianapolis. Bike lockers are to be used for parking bicycles and for day use only. They are not to be used for overnight storage or for storing of personal items. If a Park-by-Phone member uses the IN BikePort lockers to store personal items other than needed for bicycle commuting and bicycle parking, membership will be suspended and items may be removed and discarded. The bicycle lockers were paid for with a grant to encourage bicycle commuting. No other use is allowed.

Please contact the appropriate agency/organization if you have a situation that prevents you from retrieving your bike from the locker, requiring it to remain in the locker overnight. 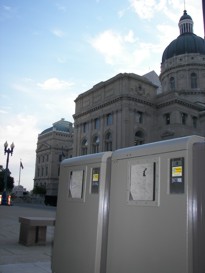 INBikePort has bike lockers for 20 bikes in downtown Indianapolis. (Click HERE for map of locker locations) With these lockers accessible via cell phone, Indy has the most sophisticated bike parking facilities in the nation! AND THEY ARE FREE TO USE with a Park-by-Phone membership of $5.95/year!!* 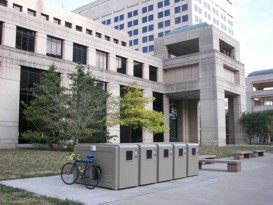 IN BikePort locations: (Click HERE for map of locker locations)

2. Merchants Garage, 31, S. Meridian Street.  Lockers are located inside the garage just inside the doors near the elevator. Click HERE for locker availability.  *Lockers at Merchants Garage are currently FREE to use with a Park-by-Phone membership available for only $5.95 per year.  The Park-by-Phone membership allows you to use any of the bike lockers in the Indiana BikePort system.

3. As of 6/23/17, NIFS bike lockers are no longer functional. NIFS, 250 University Blvd.  Lockers are located on the south side of the building.  There is a paved connector trail leading to the lockers from the White River Greenway. Click HERE for locker availability. *Bike lockers at NIFS are FREE to use with a Park-by-Phone membership available for only $5.95 per year.  The Park-by-Phone membership allows you to use any of the bike lockers in the Indiana BikePort system.

One of the most convenient features of Indiana BikePort lockers with Park-by-Phone access is you can reserve the locker ahead of time. You can find out which lockers are available, call in your chosen locker location and receive the access code before you leave home. Click here to find out which lockers are available to reserve in the Indiana BikePort system.

Once you decide which locker, call 888-310-PARK (7275) and follow the prompts to reserve the locker. You'll be provided with an access code to open the locker. Ride to the locker location, type in the access code in the keypad and the locker handle will pop open. Once you've placed your bike in the locker, firmly close the door and latch the handle/lock.

When you want to leave, simply call 888-310-PARK (7275) and follow the prompts to get the second (different) access code to reopen the locker. Once you've retreived your belongings, firmly close the door, latch the handle/lock and the locker will be available for use by someone else!

Please contact the appropriate organization/agency if you have a situation that prevents you from retrieving your bike from the locker, requiring it to remain in the locker overnight.

Click HERE to find out about this exciting development for bicycle commuting. 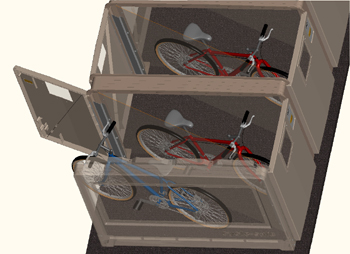 "I have been using the Bike Ports for the last 2 months, and absolutely love it.  It is the only way to park a bike downtown, just park and no worries.  I had recently had a bike stolen from a bike rack downtown, and was ecstatic to see a new opportunity. Thanks."   M. Pipkin, Indianapolis

Under the assumption that you have a bike of some value and that you are a well prepared commuter, here are the steps one must do to hitch up to a bike rack and have some confidence that your bike and its assessories will be there upon your return:

With a bike locker, you just roll it in!  Added benefits of a bike locker include the fact that your bike is out of the weather.  Your helmet can be placed in your door mounted bin and outer garments are hung on hooks and left to dry out throughout the day.  Is a bike locker better?...let me count the ways!

Want to see more bike lockers or other bicycle parking solutions?  If you wish to add bicycle parking or storage for your tenants, customers or employees, the BGI Fitness Commercial Division Bicycle Parking Solutions may have just the answer for you. BGI Commercial Division can assist in the selection, design and installation of a solution to fit your needs and budget. From basic parking lot racks to the complete INBikePort Bike Locker System, we will help you with a secure solution that will compliment your site.

INBikePort has constructed a very sophisticated system that will allow users to check in and out of their bike locker by phone.  INBikePort has partnered with CycleSafe, the manufacturer of the bike locker, and Clancy Systems International, a market leader in car parking via phone.

This new system is also fully supported on the web allowing users to determine if and where bike lockers are available.  If available, a bike locker can be reserved over the web so you know that you have a locker prior to starting your commute or recreational outing.  The full implementation of this system makes Indy the most advanced bike parking city in the nation!

Click here to get detailed, step-by-step instructions about how to use the Park-By-Phone system to access INBikePort bicycle lockers